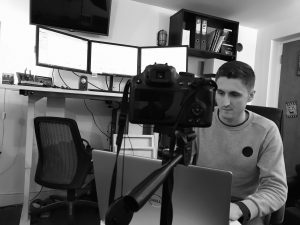 I began my trading journey for trading success around summer 2016.

Unfortunately into maybe one of the worst trading schemes at the time, which were binary options. (insert dry heaving noise). I couldn’t get enough of it, they immediately captivated me.

Binary options were so fast paced, and exciting that the inner gambler in me lit up at the chance of making some serious money really quickly.

These were always marketed on the 1min / 5min timeframes. When you think about it, who wouldn’t like to make £100 in a minute? Surely trading success would be imminent.

After clarifying my suspicions though, I soon realised they were a big pile of turd and should be avoided at all costs. Incidentally they’ve been banned in the UK now so I was completely justified in that decision.

The idea of trading a market instead of just plain gambling was hugely interesting to me from the outset.  I’ve always been a curious person and love to understand how things work. In my mind it could all be explained fairly simply by understanding some things about fundamental economics and learning from a few books. So I spent the good part of a few months in early 2017 reading day in, day out. So I could jump head first into the FX market and be able to call myself a trader.

And not a sprint to obtain trading success. However, it was lucky I genuinely was interested in the subject. More importantly I’m maybe the most stubborn person when it comes to achieving something i set out to do. Trading success was going to be mine and so I continued my journey.

I soon began searching online for a course to learn to trade. This was the logical next step for me, and soon stumbled across Infinite Prosperity. This is where I had my mind opened to a lot of things, such as probabilities, psychology, wealth, mindset etc.

After consuming their entry level basic strategies and knowledge I became bored of waiting for their strategies to play out. They took forever for even a vaguely good setup to form and whenever they did it was a loser anyway.

I hopped back on Amazon to buy another book to aid my journey on trading success. This was a mammoth read and took me forever to finish, however it was coincidentally the best I could do at that point. I was working full time in central London and did not have access to a computer.

I bought Mastering The Trade by John F Carter, and this book was exceptional in teaching you about the complexities of trading psychology. It had an abundance of examples from his own perilous trading experiences and served as a great way of reality checking myself. Again this book included a few strategies. However, I think I’d tried to learn to run before I could walk. The strategies were not necessarily complicated but my lack of experience on the charts meant I ended up not being able to trade the strategies.

As they’re an indication of what has already happened, implying you are behind the curve.

This is rubbish (the bit about not being used, as it is how you use them that counts), indicators are used by a lot of largely successful traders. Look up Martin Schwartz and Ed Seykota.

After reading this book, I found myself not wanting to apply any of what i’d read in the book as really, i’d not had sufficient chart time. Instead in my head I needed to spend more time learning about fundamentals and how news and economics impacts the FX market

So I ended up spending around $1100 AUD with none other than Infinite Prosperity. I got access to their fundamental educational material. This was good to learn about, however it served me no real useful purpose as i’d still not begun trading an active market.

I ended up buying a book by Greg Gliner called Global Macro Trader. Which basically explained everything i’d been taught in the IP fundamental education, for only £40

This left a bit of a sour taste in my mouth, but I think at that point I was so desperately trying to learn to trade and obtain trading success that I was willing to pay whatever it took to learn.

I continued throwing darts in the dark and signed up for Infinite Prosperity’s advanced trader education. For an additional $1200 AUD

Where I then spent the next 4 months learning all they had to offer. Waking up at 5am GMT for their webinars, and watching intraday time frames like a hawk.

Unfortunately I think the problem here was two fold. I still hadn’t had enough exposure on the charts at all, and was trying to learn to run before I could walk.

This coupled with the huge complexity of their strategies meant I basically p***ed in the wind for 4 months and struggled not to lose money (which I ended up doing).

I feel that the problem with this was that fundamentally the strategies were not befitting of my personality.

And didn’t make sense to me, almost like trying to assemble a puzzle with pieces from other puzzles. No matter how much you try and force the pieces to fit together, they never will naturally or they way they are supposed to.

So now at this point I think I was frustrated I’d lost money. I’d spent money on too much over priced education, and had nothing to show for it.

We all know that emotions are the last thing you should bring into any decision making process. However, it’s hard to practice what you preach sometimes, so I ended up messaging a few guys I’d known from IP.  They had left and joined another educational service where they appeared to be doing really well.

Much like a wound, I was desperate to stop it bleeding so was willing to once again part with my savings in order to learn to trade.

This was probably my worst decision as I ended up joining Falcon Trading Guidance (see below blog link for my full breakdown of how detrimental it was) https://operationtrader.wordpress.com/2019/06/02/chapter-12-04-2018-08-2018/

Essentially (and this is just my opinion and no way Able Trading) they were masters at manipulating their students into staying with the education for as long as possible. And when thinking about it retrospectively were very clever. They were basically teaching something hugely simple, but impossible to master or understand as it relied on a huge amount of subjectivity. After sticking with this for 7 months I decided enough is enough. I’d wasted enough money, STILL not made any money consistently. I  felt like I’d been betrayed, and lied to in order to take my money.

This left quite a bitter taste in my mouth when it came to trading education. This left me with what felt like no other choice but to go out on my own.

I dotted around, trying to find my own groove. Still riddled with anger as I was easily around 3/4k into my education and had made the square root of **** all.

Around June 2019 I received a message from able trading on instagram, as he’d read my blog on Falcon. They felt sorry for my misguided journey.  Saying he had the same distaste with the lack of transparency in online trading education.

We hit it off right away as we both have a similar background, and have similar opinions on subjects, so we decided to meet up for a beer as he only lived about an hour away from me.

Rich wanted to test his education whether he could successfully teach and mentor somebody and turn them around, into a consistently profitable trader. I was fully committed to absorbing anything and everything he taught me, in order to A) prove to myself that I could actually make money consistently, and B) Aid Rich to prove he could provide education and mentor somebody to the point of trading success.

My main question to able trading was could he verify that he was successfully trading for a living? i.e. Was he qualified to be giving trading advice?

His answer to this was quite a different way of looking at it.

He said he would be more than happy to provide broker statements / whatever proof I’d want.

However he wanted to see whether I could prove to myself that what he taught me would work. (he has since publicly provided proof of 12 months returns uncompounded of Net 71% with a 3.02% Drawdown. Watch here)

This was almost a self reinforcing idea as over the next few months we skyped once a week to go over progression, trades taken, refinement methods etc.

The reason I say self reinforcing is that as we discussed various trades, he began teaching me about how correlations across multiple assets play a big role. News / fundamentals etc also being a key factor but only in the background as an overlay this wasn’t essential to the success of his Able method approach or my consistency.

This again puts the thought into your head that, this person is legit as he’s accurately calling the market day after day, stating that sentiment is X today/this week, so trying to short AUDJPY  will be like ******* in the wind.

My full blog post is linked below as it is a bit more expanded and detailed for those that would like to see.

My most recent blog emphasises how important confidence is within trading success.  I discussed that simply learning a strategy is half the battle. The other half is having the confidence to execute it objectively. And know that over the long run you will be profitable. This is a very difficult concept to grasp, and thankfully this was the very first thing able trading taught me.

Without this I no doubt would have floundered and hopped to another strategy.

So for that I am immensely grateful. I cannot recommend the work and education provided by Richard. It is quite possibly the best value for money I have personally come across, and trust me I’ve looked at hundreds of different teachers, educators etc.

I have now spent 7 months consistently executing the able method, and making consistent steady returns with minimal drawdown. It can be applied to most time frames, I personally trade based off the daily timeframe as it suits my personality and lifestyle, and I find this to be a much more relaxed stress-free application of the method.

Please feel free to message me on instagram @ops.trader or alternatively contact me via my blog www.operationtrader.wordpress.com

The Ultimate Guide To A Forex Trading Strategy
Scroll to top